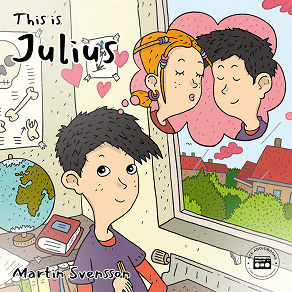 by Martin Svensson
Julius is an ordinary eight year old. All children in the 7-10 age groups can identify with him. What separates Julius from most other kids in his age is that deep down he is an incurable romantic.

Julius has realized he is in love with Linn. She is in his class, first grade at a school in Stockholm, Sweden, and he decides to ask her for a date. But it turns out to be much harder than he expected, partly because he doesn’t know how to say it, and partly because his best friend Isak constantly does things to stop him. But when Linn invites Julius to her birthday party the last weekend of summer break, and the rumour has it it will be dancing and then maybe some hugging, Julius decides to give it a try.

Julius is a special boy, and at the same time very ordinary. He lives by trial and error, and usually does his own thing. And everything he does, he does with charm and cleverness. His family consists of his mother Melek, who works at a nursing home and who exercises regularly to stay in shape, his father Bjorn, who is an author but spends most of his time thinking about the big philosophical questions in life, and his little sister Lydia, a wild two-year old with a passion for toothpaste.

This is Julius is the first book in this new success series, and it is set during the very last days of first grade before summer break.
Listen to sample
Log in to borrow