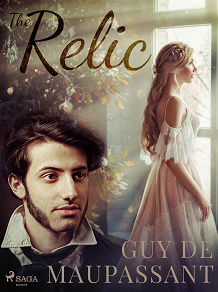 by Guy de Maupassant
"The Relic" is a love story in which Henry Fontal, a young man, writes to his old friend Abbe to help him in a very strange predicament. His engagement to Abbe’s niece has collapsed due to a present he has brought back from his trip. Now he wants Abbe to assist him in any way possible in order for his beloved to fall in love with him once again. A light-hearted, entertaining, and somewhat religious tale, "The Relic" is about ordering one’s priorities and testing man's capabilities to love and understand.

Guy de Maupassant (1850-1893) was a famous French writer, best known as a master of the short story. Master of style and dramatic narrative, Maupassant’s stories are mainly interested in the relationships between men and women, often found at the crossroads of life. One of his greatest influences was Gustave Flaubert, who introduced him to some of the central names of the time such as Emile Zola, Henry James, and Ivan Turgenev. Some of his best known works include the novels "Bel Ami" and "Une Vie", more than 300 short stories, travel books, and even an attempt at poetry.