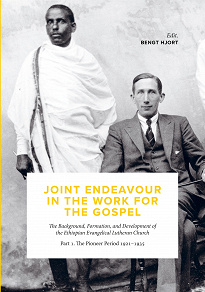 Joint Endeavour in the Work For the Gospel: The Background, Formation and Development of the Ethiopian Evangelical Lutheran Church. Part 1. The Pioneer Period 1921 - 1935

by Bengt Hjort ‚ Mekonnen Gerremew ‚ Rune Imberg
The Ethiopian Evangelical Lutheran Church (EELC) was formed in 1960 as a fruit of the mission work of Swedish Mission Bibeltrogna Vänner (SMBV), founded in 1911, its roots dating back to the evangelical revival that swept across Sweden in the 19th century. The main goal of the society was to reach the Oromo people in Ethiopia with the Gospel. In 1911 mission work began in Eritrea and in 1921 the first SMBV missionaries reached Addis Ababa, from where work was expanded into the cities of Harar and Dire-Dawa as well as into the Arsi province. When EELC was founded, members were few, estimated to around 500. Since then the church has grown and today has a membership of about 25,000. This book covers the first part of EELC:s history, describing the development from 1921 to 1935, ultimately leading up to the establishment of the church in 1960. As a background the development leading to the establishment of SMBV and the mission work of SMBV in Eritrea are described
Log in to borrow